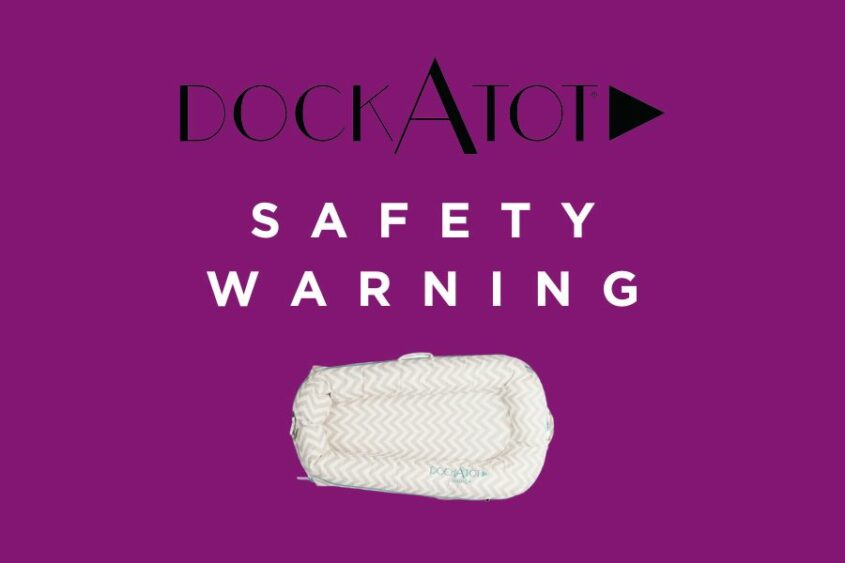 Is there a DockATot recall? The CPSC (US Consumer Product Safety Commission) issued a safety warning against the DockATot Deluxe+ Dock baby loungers for safety violations. (1)

According to the CPSC, the DockATot Deluxe+ loungers are unsafe for your babies to sleep in, and you should discontinue using them immediately. (1)

The CPSC also mentioned that there had been infant deaths associated with the use of these DockATot products. So, they’re notifying the public that these are unsafe for sleep. (1)

The brand is also prohibited from selling, promoting, or distributing any of these “unsafe products” manufactured after June 23, 2022. (1)

So, did the brand recall the loungers? What should you do with your DockATots at home, and what safe alternatives can you use for your baby?

Continue reading to find out.

What’s A DockATot & Is It Safe?

DockATots are baby loungers. They have a flat surface in the middle and walls at the side to create a soft, enclosed space for your baby.

The CPSC warns that the DockATot Deluxe Plus Dock can be dangerous when used as a sleep surface for babies due to suffocation risks from their thick walls. (1)

These baby products are designed for supervised lounging and tummy time.

However, many parents mistakenly think that these products are alright for sleeping because they look like adorable baby beds in their nurseries.

Worse, the CPSC said that these loungers are reportedly marketed as sleep products despite not being safe for sleeping. (1)

Was The DockATot Recalled?

The company isn’t recalling the DockATots, but the CPSC prohibits their sale, distribution, or importation. (1)

What’s The CPSC’s Warning About?

Last year, on June 2, 2021, the CPSC approved the ISP Rule (Infant Sleep Products Rule) that bans the sale of any baby product that doesn’t meet its specifications. (2)

The CPSC aims to remove all potentially harmful products, especially those that have already been shown to be too dangerous for use as a sleep surface for babies. (2)

With the ISP Rule taking effect in 2022, the CPSC issued DockATot a notice of violation on these unauthorized sleep products.

The CPSC reminds the company that their products don’t comply with the updated rules and they shouldn’t be allowed to continue manufacturing and selling them.

“It is unsafe for your baby to sleep in a DockATot Deluxe+; immediately discontinue its use. There are publicly available reports of infant deaths associated with the product.

CPSC has notified DockATot that it cannot import, distribute, or sell any DockATot Deluxe+ made after June 23, 2022.

DockATot has marketed its Deluxe+ infant product as a sleep product for babies even though it is not safe for sleep.”

Instead, they encouraged consumers to visit the third-website SaferProducts.gov, and to search for “DockATot” under “Search for unsafe products.” (1)

The search results showed incident reports from caregivers of babies found unresponsive after being left sleeping in these loungers.

Only the DockATot Deluxe+ Dock is currently mentioned in the CPSC safety warning for ISP Rule violation. (1)

Due to the new CPSC requirements, this baby lounger is now considered dangerous. (1)

Based on the ruling, it failed the CPSC’s safety checks due to the following: (1)

The design and specifications of the DockATot Deluxe Plus Docks can increase the suffocation risks of sleeping babies. (1)

All products manufactured on or after June 23, 2022, that don’t meet these ISP product rules shouldn’t be sold or distributed. (1)

You can’t also gift or donate these baby products because that violates the law.

Were There Infant Deaths Involved In The DockATot Safety Warning?

Yes. According to the CPSC, they issued the notice of violation because of the three infant deaths reported on SaferProducts.gov linked to the DockATot Deluxe Plus Dock, based on caregiver reports: (1)

On March 18, 2022, a six-month-old girl was found unresponsive after she was placed on a DockATot lounger to sleep. (3)

According to the incident report and the parents’ account on SaferProducts.gov, their baby’s death was assumed to be SIDS (sudden infant death syndrome) due to suffocation. (3)

The parents also added that they’d used this particular lounger with all their kids since 2017, but this is the first time something bad has happened. (3)

On June 19, 2021, a baby was found dead in a DockATot. According to the incident report, the lounger was used as the baby’s sleep surface, but he was later found dead. (4)

On July 22, 2020, a two-month-old baby was discovered dead inside a GracoBaby Pack and Play while sharing the sleep space with a DockATot Deluxe lounger. (5)

In this case, the DockATot Deluxe lounger may have played a role in entrapping the infant. Unable to move, the child could have suffocated. (5)

The incident report notes that the lounger wasn’t used based on the manufacturer’s recommendations.

There’s a warning at the bottom of the lounger against putting this in a bassinet or crib. However, someone had placed it in the baby’s play yard. (5)

Which DockATot Products Are Included?

This safety warning doesn’t affect all DockATot products, only the DockATot Deluxe+ Dock.

If you have DockATots at home, check what model it is. Immediately stop using the lounger if it’s a DockATot Deluxe Plus Dock, the CPSC reminds. (1)

As the Safe Sleep for Babies Act, passed in 2021, takes into effect, other DockATot products might soon be affected.

This law bans crib bumpers, inclined infant sleepers, and other products that can be unsafe for babies. (6)

How To Identify The Affected DockATot Products

Only the DockATot Deluxe+ Dock lounger is affected by this safety warning.

The best way to check if you have the Deluxe+ is to check the markings on one of the lounger’s soft walls. You can find the product name below the DockATot logo.

What To Do If You Have These DockATot Products At Home

If you have the DockATot Deluxe+ Dock lounger, stop using it immediately.

There isn’t any information yet on whether you can get a refund and how to process it because the brand hasn’t issued a recall alert.

Still, DockATot and most retailers or stores have a return policy. Contact the store where you bought the DockATot Deluxe+ for information on returning the product to get a refund.

Can Your Kids Still Use These DockATot Products?

No. The CPSC warns parents of the possible suffocation risks of using these DockATot products. They advise that parents should discontinue using these loungers immediately. (1)

Why Are DockATots Still Available In Stores & Retail Outlets?

You might be surprised to find DockATots still being sold on their website or at retail outlets and online stores such as Amazon.

It’s due to technicalities.

While the CPSC can now freely say that the DockATot Deluxe+ Dock loungers are unsafe and possibly dangerous to babies, they only have the authority to restrict these products’ distribution once the ISP Rule takes effect. (1)

It means that the CPSC has no control over the Deluxe+ Dockatots manufactured before June 23, 2022.

So, products manufactured before this date can still be legally sold. (1)

These baby loungers are popular because many moms find them useful as a clean, soft space to put their baby for tummy time.

However, many moms also let their babies sleep in the loungers, thinking that these are cozy sleeping spaces.

How Safe Is DockATot?

DockATots have figured in at least three infant deaths reported on the Safer Products website, so the CPSC considers them dangerous. (1)

Can DockATot Cause SIDS?

The DockATot hasn’t been tested for SIDS, and the exact reasons behind this common infant death cause remain unknown.

However, this product has walls at the side, similar to crib bumpers so it can increase your child’s suffocation risk. (7)

What Are The Baby Sleep Safety Regulations & Recommendations?

The CPSC and the pediatricians of the AAP (American Academy of Pediatrics) recommend the following methods to help reduce SIDS risk: (7)

No. The padded walls at the sides of the flat sleep surface are considered dangerous under the law. (6)(7)

Does The AAP Recommend DockATots & Other Infant Loungers?

While the AAP doesn’t specifically name DockATots as dangerous, it belongs to the same category as infant loungers and crib bumpers. The AAP doesn’t recommend their use.

No. Pediatricians belong to the AAP. So, they aren’t likely to recommend DockATots for your baby. But you can also ask your pediatrician for their recommendations on this matter.

When Should I Remove DockATot?

The CPSC’s safety warning clearly states that parents must discontinue DockATot use immediately. (1)

Are DockATots Breathable Or Not?

According to DockATot’s website, Deluxe+ and Grand docks pass the test for air permeability. In other words, they’re breathable. However, they advise against putting babies on their backs in these loungers until age one.

The muscles of babies younger than one year old are still weak and developing, so they might be unable to move their heads if they turn toward the bumper walls of these docks.

Although DockATot claims that these products are air-permeable, the infant deaths linked to their products show that breathability isn’t guaranteed. (1)

Are DockATots Safe For Newborns?

Newborns can’t control their heads and bodies, so they aren’t likely to roll over yet.

While that doesn’t put them at risk of suffocation against the lounger’s bumpers, keeping them away from products that the CPSC and AAP consider unsafe is best.

Yes. As long as the activity is supervised, awake tummy time is important in helping your child develop their muscles.

WARNING: Never leave your baby unattended in the docks or loungers.

Are DockATots Safe For Unsupervised Sleep?

No. DockATots aren’t designed for sleeping, especially unsupervised sleep. Three unsupervised children have died in or near DockATots, based on caregiver reports. (1)

Are DockATots Safe For Supervised Naps?

No. It’s still not a good idea to let your baby sleep in DockATots, even if you’re watching them.

It’s not always easy to tell whether your child is getting enough oxygen while sleeping. Supervision might not eliminate the suffocation risks. It’s best to avoid letting your baby sleep in these loungers.

Are DockATots Safe For Co-Sleeping?

No. DockATots are unsafe for sleeping, whether you’re co-sleeping or not.

Can You Put A Dockatot In A Bassinet Or Crib?

No. Never put a Dockatot in your baby’s sleep space.

It’s against the manufacturer’s recommendations, and one baby has died from positional asphyxia while sharing the sleep space with a DockATot Deluxe lounger. (5)

Which Is Safer: DockATot Or Snuggle Me?

Both products have raised bumpers at the side that can increase your baby’s suffocation risks. (7)

They might be good for supervised awake tummy time, but don’t let your baby sleep in these products, even for a short nap.

Did The CPSC Also Issue A Warning Against Other Infant Loungers Like SnuggleMe?

While the CPSC’s most recent safety warning involves DockATots, other infant lounger brands have also been called out in the past: 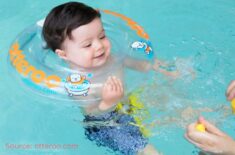 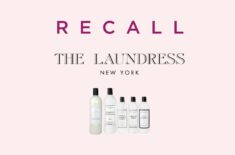 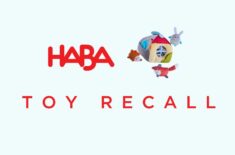 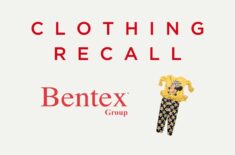 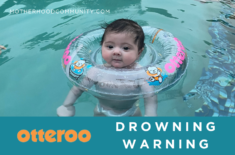